In summary, at the Hawaiian State Hospital 23 mentally ill criminal patients were ‘healed’ between 1984 and mid-1987. However, Hew Len’s method was NOT a one-level 11-word mantra unknown on Hawaii, but the 14-step Ho’oponopono of Morrnah.

One of the biggest misdirections in the spiritual realm

Writing this part was no fun because Ho’oponopono is a project of peace, not confrontation. However, there are life cases that need to be weighed and overriding circumstances taken into account, where the fate of thousands is to be contrasted with that of an individual and a few hundred of his successors.

Above all, if one is a witness to a large misdirection in the psycho-spiritual area, but also has the possibility of enlightening others to it, and feels the courage, one has the duty to do so. Ultimately, even pushed to clean up anyone involved with it. I got my Ho’oponopono training by Morrnah around the same time as Dr. Stanley G. Hew Len, that is, I was given permission to teach Morrnahs Ho’oponopono levels 1-3 (‘Basic I-III’) for life. Hew Len probably received this a year earlier.

Afterwards, he and I had a good time and we often met for seminars with Morrnah. Shortly after Morrnah left us, our paths separated around mid-1992. It was only through the book Zero Limits by Joe Vitale that I heard about him again in 2007.

he history of the Hawaii State Hospital ‘healings’

In a closed section of the Hawaii State Hospital, Dr.Len, with the permission of Morrnah, carried out the 14-step procedure she developed at that time (formally counted in 12 steps), which in three years restored 23 mentally ill criminal patients to the point where they could be released (or sent to a normal prison, depending of their criminal status). In all the seminars that I attended with Dr.Len, his sharing with the class of the continuation of this ‘healing’ was THE topic.

Two patients were temporarily transferred to another ward as not cured. Why not healed? Because between them and Dr.Len there were no karmic connections. Yes, you read it right: Ho’oponopono only heals karma.

The Len Mantra – beautiful, but not Ho’oponopono

Dr.Len is said to be the source of the saying, “I love you, please forgive me, I’m sorry, thank you”, which appeared publicly around 1998 (six years after Morrnah’s death) and, according to his book ‘Zero Limits’, were addressed by him to a divinity – not to people. It’s a simple, though beautiful, 11-word prayer, but NOT Ho’oponopono. Thus, this prayer, let’s call it the ‘Len mantra’, could not have been applied at the Hawaii State Hospital about 15 years earlier in 1984-87.

Nevertheless, Joe Vitale recorded Dr.Len’s answer to having used even a shorter form: [quote] „I just kept saying ‘I am sorry’ and ‘I love you’ over and over again“ he explained.

Although these two lines are not marked with ” * “, it is clear to everyone because of countless text releases that herewith Joe Vitale asked with the first line, and Dr. Len answered with the second one. Unfortunately, these two lines have been used to continiously and erroneously link Dr. Len’s 11-word mantra with Morrnah’s Ho’oponopono, and it has become established as that. Furthermore, neither Vitale nor Len contradicted this interpretation.

In all the seminars of 1986-91, in which I and over a thousand others took part, Dr. Len only talked about the 14-step Ho’oponopono process (formerly 12-step) according to Morrnah, which he used at the Hawaii State Hospital. There are video and audio recordings of this by us.

Since the story that 23 mentally criminal patients were healed only using the mantra is untrue it follows that the spread of all the information and teaching through the writing and speaking of his imitators in speaking and writing, and the blogs, seminars and books based upon it, are also untrue regarding the same claim. Regardless of this, the mantra acts as a reassurance due to its repetition and the ever-reissued thought forms that temporarily affect all those involved.

According to a signed promotional letter from Dr. Len to about 1500 German, French and English-speaking naturopaths from October 5 and 23, 1990, as an invitation to attend seminars on ‘Self-dentity through Ho’oponopono’, he ONLY applied the Ho’oponopono of Morrnah “at least twice a day in connection with HIS records”. And he explains further:

[quote ] “I was asked to work on Charles … whenever I went to see him for observation, he was put in strait jacket to prevent his attacks, and on several occasions it could not be helped to bring him to a padded room after he had attacked others.
[see the following original letter] : 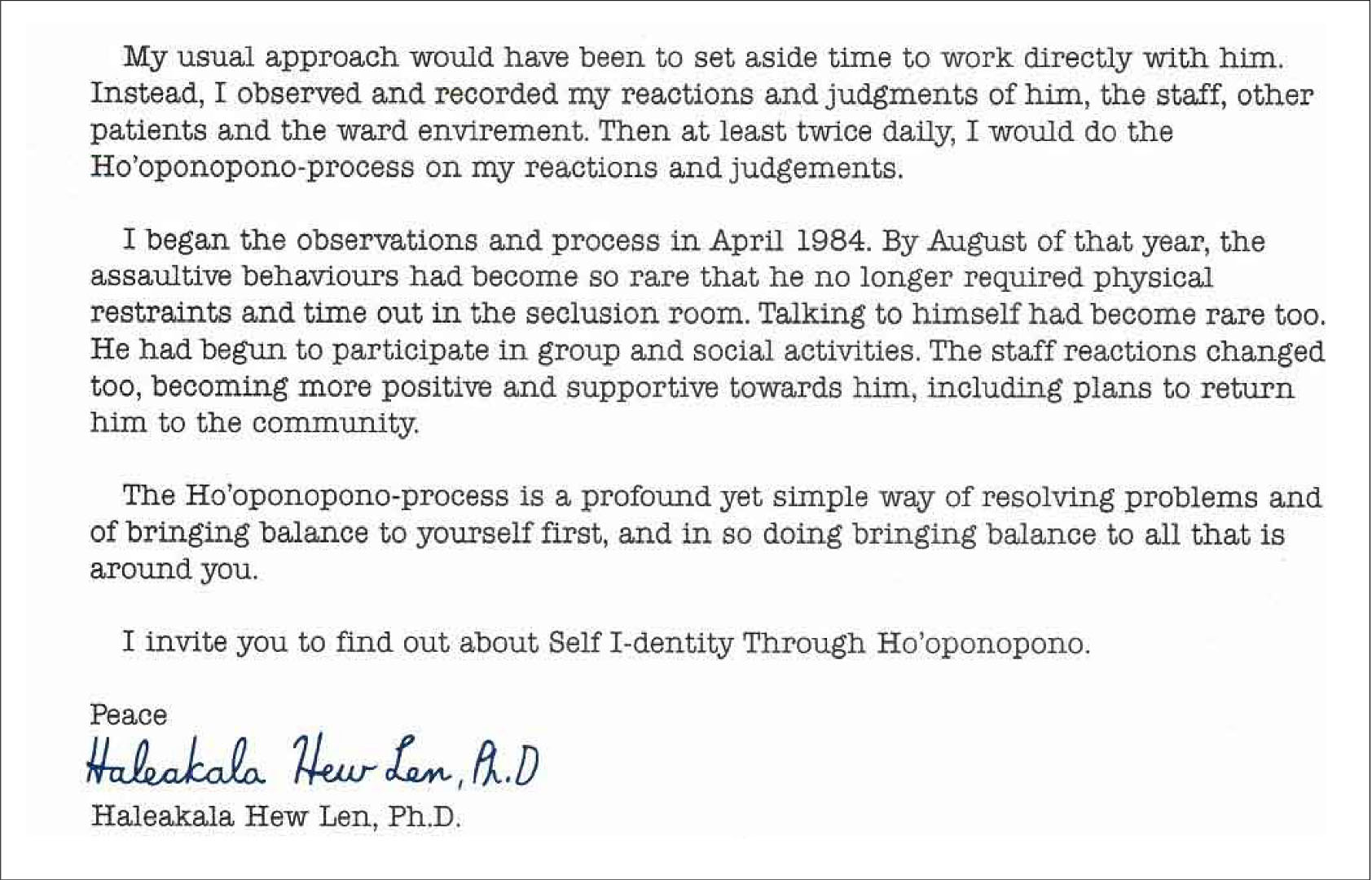 In fact, this method in the above letter is the method of Morrnah’s Ho’oponopono. Just like that. So no word on “just bowed over the record” or a mantra repeated “over and over, nonstop” as in the book ‘Zero Limits’, etc. ALL reports about this so-called ‘true story’ are lies.

May this matter be spread step by step RIGHT and PONO, in memory and with respect for the work of Morrnah Simeona.